DC’s Vertigo Relaunch why I’m excited and why you should be too!

Oh, for crying out loud, yet another reboot!? No, not really, a relaunch and duly noted I think a lot of us can get a little eyerolly over the seemingly endless piles of them from out big two publishers. But you know, I kind of like the looks of what I’m seeing out there at them moment.

Alongside you I get a little grumbly over the notion that we need an all new set of number ones to keep us interested or to give us a faux jumping on point. Marvel for example seems to have had someone screw their head on on right for a change and has decided to not simply abandon the Legacy numbering system that they went back to, lauding it to attract collectors back to milestone issues like Captain America #700 or Amazing Spider-man #800. It does require a certain suspension of disbelief, you may have to turn your head sideways and squint some. But they -probably- are at those numbers if not eclipsed them with offshoots and sidebar runs. What is important and what grants them legitimacy after they announce a new run, Ala, Immortal Hulk #1, Deadpool #1, and Dr Strange #1 (out this week btw in all truly good comic shops!) is that they HAVE THOSE NUMBERS STILL ON THE COVER right underneath the new numbering. I know its likely a pipe dream that these ease of collecting and sorting will continue, until a new editorial staff takes over and some new designer sends the extremely simple and helpful system back into mothballs. However, for now, we will have the lovely opportunity with that, combine with them putting story arc numbers on the banner above the main titles on many books (thank internet Jesus they are doing this too, for now). When someone reveals the incredibly understandable trepidation of picking up a legacy book or any ongong for that matter of: where does one start. You can at least push them into the shallow end of the pool with a legit story starting point.

Back to Vertigo though! They are relaunching. All new number ones and all new titles and a new editor in chief. These aren’t the carry ons of things necessarily previous though I’ll dare say we’ll see some cross over, somewhere, because these are comics and the comics world is nothing if not a web of interconnecting multiverse stories. What I like about DC’s Vertigo doing it the way they are by just wrapping up what they are doing now and about to leap into again, isn’t that they are cash cowing on the #1 craze (which I’ll argue later in many cases isn’t even a real thing), or seemingly so, but this actually makes me feel like we are seeing a Season drawing to a close and a new one beginning. And like seasons, they don’t just have a hard bookend, there is a transition period of sorts. Not some huge event that “ends everything making way for a new beginning” but a chapter anthology book has finished and now a new one begins. This is something that is relatively new, if it was their intention or not, I’ve no way of knowing, I’m not Bleeding Cool, no one tells me anything.

I’m sure some of their more successful current titles will have a place in the future of DC’s Vertigo under the watchful gaze of Mark Doyle, I couldn’t tell you what all may be or may not be carrying on. But I am excited by the list of talent I see lined up for this first wave of books. Do you like Adventure Time? how about Wonder Woman? Shade the Changing Girl? The Punisher? Michael Cray? Spider Gwen? or the odd ball and mid run renamed FBP? There is talent from the business world and from the artistic en-devours of people who worked with some of the most popular music of our generation and even an acclaimed podcaster in the mix of creators. That is just a tiny sampling of what these creators have already worked on and will be bringing those creative chops to bear on all new titles. I’ll let the link I’m providing to the rest of the blathering for me. So if you like a little bit of the weird and off the beaten path, be sure to give it a click.

But please, do me a solid and swing by the shop. I’d love to hear your thoughts on these and I’d really like to get your want numbers for these titles. I’m personally looking forward to Hex Wives and Second Coming, thought Goddess Mode also peeks my interest. 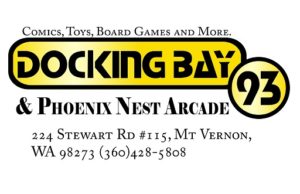