a review, by Patrick

Amazing Spider-Man number 800 is what a milestone issue of a long running iconic superhero comic should be. I’m not going to sit here and try to tell you, the discerning reader who seeks out the blog of a small local comic shop for reviews of a comic that came out over a month ago, that it’s the greatest superhero story ever told because that would be the Awesome Slaptstick number 1. I am, however, going to sit here and tell you that it was a fun superhero story. 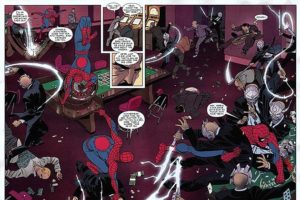 The benefit to having this kind of story in a big fancy special anniversary type issue is that someone who has never ever read a spider-man comic in their life can enjoy it because the plot isn’t bogged down with context that can only be understood if you’ve read every Spider-Man related comic for the past decade. This also means that it is an approachable read for a lapsed reader. Don’t go thinking this issue is totally free of the effects of continuity from decades of serialized storytelling however. It’s just that you don’t need to read that one specific issue of Peter Parker, Spectacular Spider-Man to follow it (you know the one I mean) because any exposition you need is provided by dialogue and/or caption boxes.

This issue should be especially satisfying for the avid readers of Spider-Man who have been following Dan Slott’s run. I haven’t been following it but even with my rotten pop culture addled brain I could tell that this comic was the culmination of multiple storylines. That brings us to the second thing this comic does well, it celebrates Spidey’s history without being too on the nose about it. 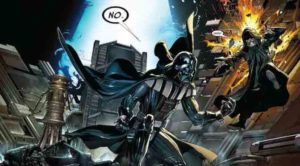 You see, the big villain in this one is Norman Osborn, the Green Goblin, who you may have heard of. The twist here is that Norman is wearing the Carnage Symbiote, making him the Red Goblin. WHAT? That’s crazy! It’s just the right level of cheesy mixed with a feeling of inevitability to it. Like, of course they’d do a story about one of Spidey’s classic villains getting a symbiote at some point! Besides, everyone is getting a sentient layer of goo spandex in the Marvel Universe these days so, whatever. 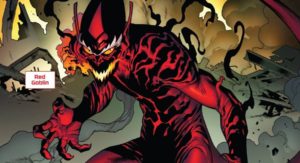 What makes the Red Goblin more than just another Venomized or Poison X gimmick is that it makes sense within the poetically ridiculous storytelling conventions of fictional superhero comics. Not only does it make a perverse kind of sense but it also brings together two separate past eras villains into the current era. 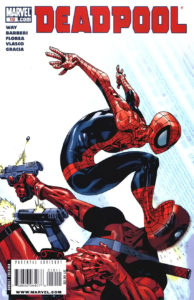 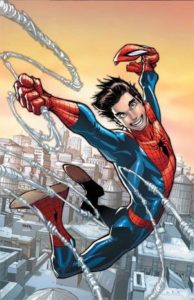 Some comments about the art. It’s good. It’s not amazing. Most of the layouts are pretty straightforward stuff. A lot of different artists worked on this issue but that’s fine because it’s never jarring, which isn’t always true of comics with multiple artists. There is also some really fun imagery throughout the book. 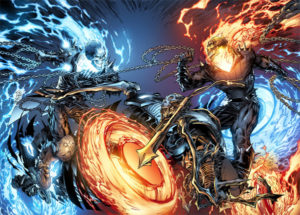 Here is a list of the artists who worked on this issue. Stuart Immonen, Humberto Ramos, Marcos Martin, and Giuseppe Camuncoli (And others pictured with random example grabbed from around the internet). Each one gets their own little chapter to illustrate, which helps the transition between artists. 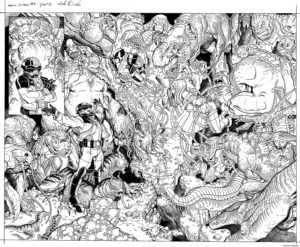 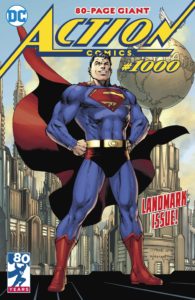 Doing issue one thousand as an anthology implies that the corporate hive-mind doesn’t have much faith in their big milestone issues ability to sell well among comic readers. It’s understandable why they would want to a sort of retrospective anthology considering that it’s very likely a lot of people who don’t normally buy your comic, let alone comics at all, will pick this one up. An anthology can be approachable to new readers but it’s a major missed opportunity for attracting those new readers and tricking them into buying more comics!

Anywho, you should head into Docking Bay 93 and buy a copy of Amazing Spider-Man number 800 and a copy Action Comics number 1,000 then you can agree or disagree with me. If you buy either comic from a place that isn’t Docking Bay 93 then I will not be able to recognize your opinion as being valid.

I give Amazing Spider-Man number 800 a rating of three out of four symbiotes.

PS: Since it took me so long to find the free time to get this written up, you lucky readers get a mini-review of Amazing Spider-Man number 801! 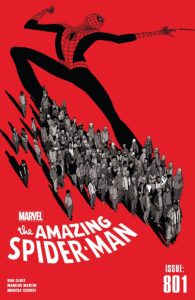 It’s good. The art and story are both solid. This issue works as a farewell issue for writer Dan Slott with art by Marcus Martin. I don’t know if it’s Martin’s last issue or not.

There is a brief recap of Spidey’s origin that is artfully done. It only hits on the key moments so as not to make long time readers roll their eyes while also giving that rare mythical individual who is unfamiliar with the origin of Spider-Man all the info they need.

The bulk of the story doesn’t star Spider-Man, though it’s undoubtedly about him. Most of the issue is about a New York citizen who was present at one of Spidey’s early convenience store robbery thwartings. After the thug gets webbed up we follow the life of this bystander using the same technique used to recap the origin earlier in the issue by giving us just enough details via words and art to give the idea. This gives the conclusion of the story, set in the “present,” a nice emotional impact. Go buy it and agree or disagree as you will.

(Patrick wrote this review and it is HIS review, not Docking Bay 93’s, though we are happy to let him help us plug milestone comics any day of the week. Patrick works locally with teens at an after school program that I won’t name unless he gives me permission. In his off time he likes to hang out here and tell us why he is right about comics and the rest of us are wrong, he sits with Glen, and they “Statler and Waldorf” the news of the day almost every Tuesday evening down at Docking Bay 93. Some more of his insights and reviews on comics may be forthcoming, if he is so inclined to share them with me for posting. I posted all of the art samples from random art grabs of creators on this book from many of their other works, so those are my fault. Cheers! – Dan)