I’m going to try to periodically (I have no illusions about being consistent) list off a few comic #1s that are coming out every once in a while. If you visit the store on a regular basis, you know that you can get a sneak peak at all our new weekly titles on Tuesday, as we use the early delivery options offered by Diamond Comics Distribution. While we can’t sell these books on the day they arrive we can make sure they get into your hold box, so you can purchase on the street day of Wednesday and not miss out. If you don’t have a hold box. Please ask, saves you time, saves you money, saves you a headache. Now on to some of the interesting things hitting the shelf this week in no particular order. 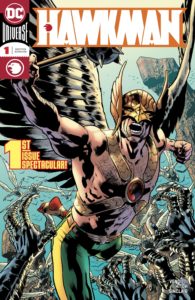 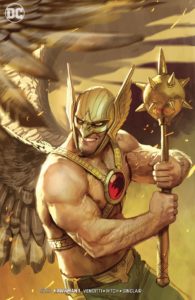 I am have zero doubt that the variant cover to this book will not only be collectible but highly sought after. Sejic is already a popular creator in creator owned arenas. Their work appearing for DC ups the ante on these virgin cover printings. That is to take nothing away from the main cover, but I can tell you as a retailer, I feel a lot less bad ordering as heavily as I did after seeing these. Fantastic work. 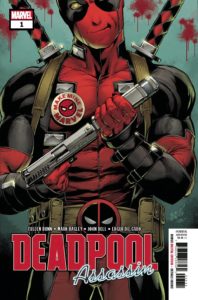 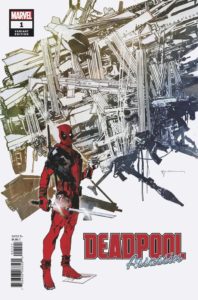 Ultra-violence by Marvel Comics. This variant cover was shipped as an order as many as you want cover, so for our preorder I went 50/50 with the main (we won’t discuss the shipping errors yet, being as I want to finish the blog in a good mood), unfortunately we were short a few, hoping they’ll arrive tomorrow. I will reiterate the usefulness of the Diamond Preview guide and preordering with our hold box program right here (I will never stop harping on this btw) with the notion that I’m reminding you to get me your wants early so I can order accurately and receive these comics in the quantities that don’t require me crossing my fingers and hoping that a mad genius like Sienkiewicz is seen as agreeable to you as much as it is to me. Also this comic is ultra-violent, with a dash of humor, and some more violence. Its like a Shaolin Cowboy comic but with a lot more talking. 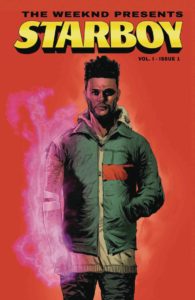 This book seems a little neo-noir-sci-fi to me. I want to give it a try and I have some mixed feelings about it. The blocking on the art is fantastic and the designs I’m really enjoying for it being a near distant future with some fun call backs with the fake adds between pages which reminds me of the corporate dominated future of RoboCop. Something very Frank Miller about it that gives me a chuckle. However with art this good I’m having a little trouble deciding whether I like the aesthetic choices that were left with the slightly pixelated look to some of the line work, in some panels it was very clearly a choice, and in those few panels makes for some really cool effects, where in others it seems like it was a result a low res image that was resized but not retouched, which for major publisher like Marvel kind of hurts a little to see. This title has a parental advisory for a very good reason, its opening splash page is artistic and future fantasy, it pulled me right in, followed up by something brutal and gory. I don’t think the comic looks to pull any punches and is something of a throw back to the Marvel Max line in some regards. I honestly hope readers will give it a shot, but I’d be interested to discuss with anyone their thoughts on the art, am I being fickle? I feel like I might be. 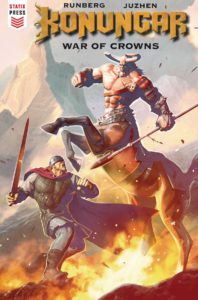 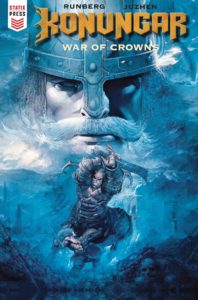 Every once in a while I get a smaller press book in and I think can’t help but wish that I’d ordered a lot heavier on my initial order. This is one of those situations. The interiors of this book are stunning. If you are a swords and sorcery fan, I think this translated work is right for you. And keep an eye on Titan’s work with the Statix Press line, the work they are finding and bringing into the US for distribution is worth a gander. We’ve been stocking (lightly at first) the majority of their offerings. Which you will find in the preview guide and can easily request. I’ve put in a restock order already for this book. As its a reprint, I don’t think it will have a huge collector value but as far as bang for your buck goes this $5.99 titles provides a very dense comic compared to its contemporaries. No back up story to justify the price tag, just more content, quite a lot more of just straight up fantasy comic. This is a quality work. 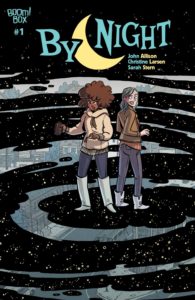 I’m going to let Diamond’s solicitation do the talking on this one. But first I will say this: I appreciate Boom Studios a whole lot. They have some young adult and all ages books that don’t get nearly the attention they deserve. I’m thrilled to host their titles on my shelves though, their variety shows me that there is a conscious effort out there to reach out to all audiences in some very innovative ways that also show that they stand by their product in a way a lot of other publishers, just, don’t.

Eisner-Award winning author John Allison (Giant Days) and artist Christine Larsen (Adventure Time) join forces for a story about coming home, discovering identity, and accidentally smashing a hole to another dimension.
Aspiring documentarian (and actual Chemistry major) Jane has recently reunited with her former best friend Heather, amateur urban explorer. When a trip into an abandoned industrial building leads them to another world, their plan begins to unfold.create a documentary about the world and become filthy, filthy rich. The other side of the portal is filled with monsters, magic and a chance for a whole new life. All they have to do is step through… 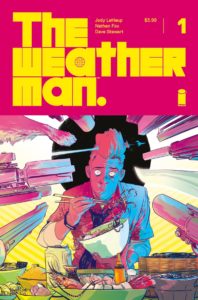 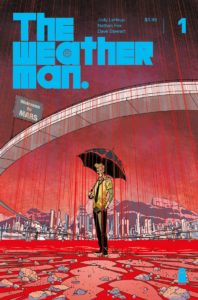 This has something of a cyber punk look to it as I flipped through it, but as we’ve seen with the last years of Image #1s the first printings looked to be relatively short run, so reorders will be in short supply. This has got a pretty good cast of creators, if you enjoyed the wacky Shirtless Bear Fighter,  fantastic color work of Hellboy, or the energetic art of DMZ and Haunt you might just want to give this a look. I don’t think this is going to sit long on the shelf or make it to the back issue bins for that matter.

At this point in the blog I’ve pretty well run out of time. So I’m going to list the remainder of the #1s I’d intended to do some brief write ups about and simply use the Diamond solicitations cut from their website. These are all books I’m taking home with me and you should too. That being said… 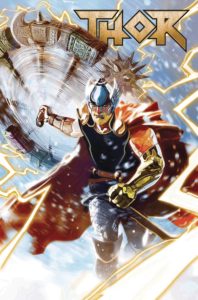 JASON AARON & MIKE DEL MUNDO TAKE THE PRINCE OF ASGARD IN A WHOLE NEW DIRECTION!
Thor Odinson has regained his mantle – and with it, a wild new world of trouble on his mighty hands! The artifacts of Asgard have been scattered across the earth, and to reclaim them, Thor will have to face some ugly truths. Like the production cost of hundreds of new hammers! And the Thunder God is going to need every last one of them if he’s going to stop the unstoppable Juggernaut. Jason Aaron takes the Prince of Asgard in a whole new direction with YOUNG GUN artist Mike Del Mundo joining him at the helm! And don’t miss the latest chapter of the King Thor saga with acclaimed BLACK BOLT artist Christian Ward, as the Thor of the far future encounters an old friend who’s undergone some startling changes.
Rated T+
MARVEL RISING ALPHA #1
MARVEL COMICS
(W) Devin Grayson (A) Georges Duarte (CA) Gurihiru 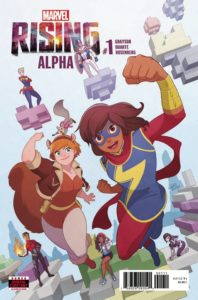 This summer, SQUIRREL GIRL meets MS. MARVEL – for the very first time! When Doreen Green (also known as the Unbeatable Squirrel Girl) volunteers as head counselor for an extracurricular computer programming class, little does she know that junior counselor Kamala Khan moonlights as crimefighting super hero Ms. Marvel! But this coding configuration is more than just ones and zeros when a mysterious new super villain shows her face! Will our heroes be able to save the day without blowing their secret identities? Join Ms. Marvel and Squirrel Girl (with some special guest appearances) as they learn what it truly takes to become the next generation of Marvel heroes!
Rated T+
STELLAR #1
IMAGE COMICS
(W) Joseph Keatinge (A/CA) Bret Blevins 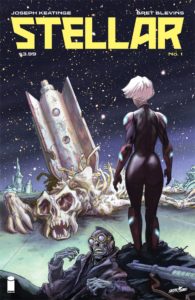 Stellar was taken as a child and transformed into the ultimate weapon, one that would end an intergalactic war. She succeeded…at everything except finding peace. Reduced to a bounty hunter, she scours the worlds she’s broken, searching for redemption. But there are other weapons loose in the galaxy, who just can’t leave the war behind them. JOSEPH KEATINGE (GLORY, SHUTTER) and legendary artist BRET BLEVINS (New Mutants, Sleepwalker) will transport you to another dimension, filled with crashed spaceships, fast-talking aliens, and ageless wonders.
PROXIMA CENTAURI #1 (OF 6)
IMAGE COMICS
(W/A/CA) Farel Dalrymple 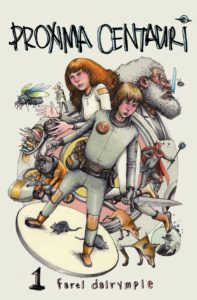 “PROXIMA CENTAURI,” Part One-4.243 light-years from Earth, the teenage wizard adventurer Sherwood Breadcoat is stuck in the confounding spectral zone on the manufactured dimensional sphere, Proxima Centauri, looking for escape and a way back to his brother while dealing with his confusing emotions, alien creatures, and all sorts of unknown, fantastic dangers.

In this issue The Scientist H. Duke sends Sherwood on a salvage mission and gives counsel to the troubled boy in his charge. 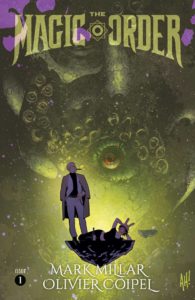 We live in a world where we’ve never seen a monster, and The Magic Order is the reason we sleep safely in our beds. Magic meets the mob in THE MAGIC ORDER, as five families of magicians-sworn to protect our world for generations-must battle an enemy who’s picking them off one by one. By day, they live among us as our neighbors, friends, and co-workers, but by night, they are the sorcerers, magicians, and wizards that protect us from the forces of darkness…unless the darkness gets them first. MARK MILLAR’s first NETFLIX comic book, drawn by the incredible OLIVIER COIPEL (Amazing Spider-Man, Thor).