Conan the Barbarian: Exodus – Grabs you by the Lapels

When I got back into comics (if you’ve spent any time around me you’ve heard this story) it was on a lazy Sunday evening after getting off work at the local movie theater that I wandered into Docking Bay 93 while it was in one of its Burlington locations, adjacent to the mall. I hadn’t really picked up a comic book in years having been a 90’s kid whose last interaction with sequential books was DC’s Reign of the Supermen following the buzz of Death of Superman, that allowance eating journey is another story though.

On that lazy Sunday I discovered it to be the first Sunday of May, which just so happens to be the day after FCBD (Free Comic Book Day). So there was a small selection of comics laying on the counter left over from arguably the greatest retail holiday out there. One such book that was left over was Conan, the Spear. Well, I blame this comic, largely for the events that followed, though it would take them a good three years to reach maturity. 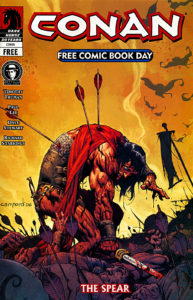 To be fair, but I do like to place blame, that it wasn’t until Conan #0 with true to character writing by Kurt Busiek (story), amazing pencils and layouts by Cary Nord (art), and gorgeous coloring, largely right over pencils, because they were that clean, by Dave Stewart (colorist). With this team I really kind of sunk my teeth into comic reading again. Seriously though, Stewart deserves a lot of credit for his work on this book, the tone of the book would be entirely different had it been bucket fill with some shading here and there, he did beautiful work bringing the hyborian age to life. I cannot lie though, it was the art that grabbed me by the front of my shirt and gave me a healthy shake. After the first couple of issues I opened up a hold box and then several years later, ended up buying the entire damned shop. When I see Busiek at conventions I’ve had him sign things, and take the opportunity to blame him for becoming a business owner. I’ve nothing but love for him but cannot resist the pull of snark. His story telling and world building whether playing in someone else’s sandbox or his own always feels very tight and well reasoned. Take the time to read Tooth and Claw (later renamed to The Autumnlands item code: FEB198876 if your local shop doesn’t have it on the shelf) to see when I talk about world building.

ALL THAT BEING SAID, and on to my point, I’ve just read the latest offering from Marvel of Conan in the form of Conan, the Barbarian: Exodus (second printing reorder code: JUL198192). This book reminds me of those early moments of reading the Dark Horse series from 2004. While the main title under Jason Aaron’s guidance (Thor among other amazing titles) and with art by Mahmud A. Asrar which captures all the tones of swords and sorcery that I love. On issue #1 of Conan, the Barbarian the main cover is by Esad Ribic. And they’ve now handed over an entire series to him as Writer/Artist. 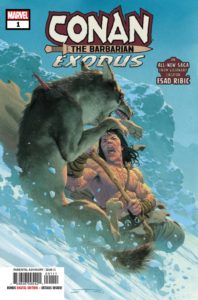 Let me tell you Ribic is a creative phenom and this first book of Exodus is amazing. It grabbed me by the lapels and gave me a good shake. I’m very excited to see what is next in store. There are some things that I like about it, it doesn’t spend time rehashing old information, but it does give us a series of escalating encounters (Gon style) as a young Conan works his way out of Cimmeria to “more” civilized lands and rewards us with a little tidbit on some of barbarian’s style comes from. There is effectively no dialog, the story is told all in the sequential art. And when other people do show up, they handle the language difference in a way that really delighted me, so big time kudos to VC’s Travis Lanham on the lettering, you are a hero sir. Keep an eye out for this book which is heading for a second printing of number 1 already, an deservedly so.