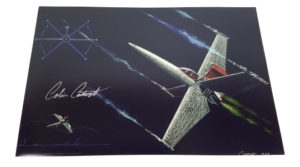 Colin Cantwell is the original concept artist and modeler for all things that flew in the first Star Wars movie, A New Hope. His designs include the X-Wing, TIE Fighter, Death Star, Star Destroyer, original Millennium Falcon, Y-Wing and others

At 2:30pm Colin will give a free presentation featuring exclusive videos describing his interaction with George Lucas and his work on Star Wars. Also featured will be an audience choice of videos showing some of his other iconic projects including his work on 2001, A Space Odyssey and War Games, as well as his being the Hal 9000 Computer that fed Walter Cronkite the progress of the Apollo 11 moon landing as Walter was broadcasting on live TV. This will be followed by an opportunity for fans to meet Colin, ask questions and share stories.

Autographs will be on sale for $25 and include a free 8×12 print of either his original 1974 Star Wars concept art or his 1975 photos of the first Star Wars models. You can learn more about Colin at https://colincantwell.com/

We are very excited at Docking Bay 93 to be hosting him and we hope you’ll stop by and share in that excitement with us!