The Predator – a review – by Dan

Okay, I’ve waited a few days. I thought I’ve give my impressions on The Predator, in theaters now. Some spoilers ahead, though if you watched the trailer at all you already have seen pretty much everything I’m covering here. Because, honestly, who doesn’t want the biggest plot point of the movie spoiled for them months in advance! Ha ha ha heh… me either, thanks Twentieth Century Fox. 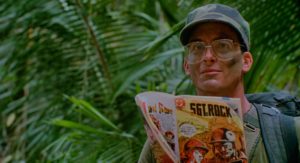 I didn’t know if I’d like the film it or not, the director, Shane Black, was in the original film, which is a huge callback. I believe he played Hawkins who dies really quite spectacularly and memorably as the first victim from the team by the Hunter. When he dies we learn things, important things, not good things. He has some fun credits to his name, I feel like he wasn’t a bad choice to do this film, not by a long-shot. While some cgi elements pulled me out a little I was able to settle into it and the practical effects were I’d dare say the best we’ve ever seen for any of the Predator films.

But I really got the feeling they tried to go for cool over a lot of substance. I’m not looking for a lot to unpack in a Predator film, but this was like watching someone play with action figures a little bit then turn that into a massive budget affair. There were also some editing choices that makes me feel like there has to be a really fun extended version of this.  I have a fantasy that there is a whole short film about the adventures of Nebraska Williams having a zany time talking a policy officer out of his cop car that we missed out on and is laying forgotten on the cutting room floor.

I suppose its a problem I regularly have when getting excited for a film, it will often not measure up. I didn’t dislike the film mind you, it just, didn’t scratch the thriller monster movie itch I’d hoped it would. Which is why I was there, but recapturing the lightning in the bottle of the original film is a tall order. Taking a campy action film and flipping it into a serial killer/monster/sci fi thriller isn’t just something you do, apparently.

The big problems I had with the feature wasn’t the long game I thought they were playing, Laying out some plotting to try and extrapolate what the Predators might be doing and what they are after is neat, besides it being a safari for them. In fact I think that was one of the strongest parts of the film, brought to us mostly by the I already figured this out pronouncements from Traeger and meddling by a kid who sees the world as only a savant can, played quite capably by Jacob Tremblay.

But the creative plot extrapolating had the result also, in my mind of debilitating the threat of the Hunters, when there is just a bigger badder bad-guy it kind of makes the original guys look fairly irrelevant, regardless of them making a big show of how ridiculously outmatched humans are in comparison. They tried this in Predators (2010), pulled it off well and we learned things, good things, things to grow on.

Sterling Brown’s portrayal of the villainous Traeger was legitimately a sociopath, and a great foil for the heroes, including Olivia Munn whom he seems to want to bump off… for reasons that make sense and then stop making sense very quickly. She is assisted by Boyd Holbrook, playing Quinn McKenna, a total special forces badass sans Arnold musculature, who manages to get himself into all kinds of trouble and through happenstance, his son the aforementioned boy, who can decipher alien rune language like its tic-tac-toe. And HE is further assisted by a rag tag group of crazy ex soldiers who are there for comedic relief and to show just how little life means, I think. Traeger continues to dog the heroes  and entourage until his threat was removed for a so quick you’d almost missed it gag-reel death, which sucked if for no other reason than it sort of breaks a promise.

There is clearly and overall plot line that connects these films loosely, at least I feel like they are trying to get to one, but the escalation of risk kind of makes me curious as to where they can actually go now except hurtling toward cgi ultra-violence, which I doubt will hold my interest for long. But I’ll still play a ticket price to support the next leg of the franchise. On the flip side of that though, I like the idea that the series, has only become a series because there is more than two films and have zero overlapping characters to date. I think that gives them a lot of creative wiggle room. So you win this round 20th Century… 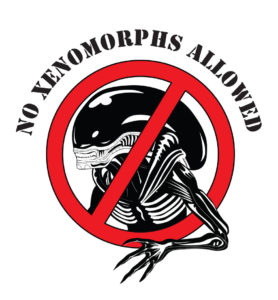 I don’t think I’d place it above any of the other feature films that the Predators have appeared in honestly. They missed the mark with the first AvP film and I always thought that AvP 2 got kind of a bad wrap and this film sort of treads over a lot of the same territory, minus xenomorphs. So…. I dunno. Overall, not sure I liked it or disliked it. Leaning toward the latter maybe. Funny side affect of that though is that when you try and place a film franchise in best to worst order it has the inevitable result in pushing some of those other films up into view again for review and you appreciate them differently. Hmm. Food for thought, looking at you Alien 3.

The movie wasn’t without its fun, but it was certainly a Michael Bay kind of fun, I mean anytime you can sneak a vestigial hood slide into a film it has to be good fun, right? I suppose any film that treats life and death with as much irreverence has to also be showing us something about what we find entertaining as a society, maybe there was more to unpack than I realized!? but I doubt it. This is also the same production company that brought us Deadpool after all. So over all I don’t give the film a thumbs up or a thumbs down… kind of a thumbs-sideways-good-effort-guys! kind of rating. You can judge for yourself of course. I’ll console any disappointment I have with memorabilia sales.