Ikoria, Lair of the Behemoths 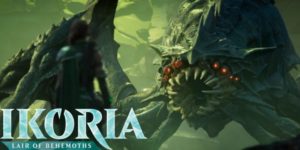 The new set of Magic the Gathering. Ikoria, Lair of the Behemoth seems like an overgrown 10 pound baby that refuses to be born into the world. Covid-19 is having none of its kicking and womb somersaults, you stay in there til its safe baby Ikoria.

Wizards of the Coast however is doing some inventive work to keep players interested and up to speed. Which is pretty keen. As much as I quibble and fuss over some of the choices made by Hasbro concerning a publisher in their domain that requires so much of my time, and business, while year after year seemingly to give less and less back, I have to say I think they are winning me over with their efforts to do Something.

Years ago when I was running farming implements and feeding cows with my Uncle and Cousin I remember him, my Uncle Jerry, giving me some of his sagely advice in the face of some mechanical and deadline issues we were having (If I recall correctly we were basically hand building a grain truck out of a flat bed and an old stock rack, there is a longer story behind all that). At the time we were broke, the economy was in the dumps, and their was a difficult time ahead recovering from a severe drought that had hit the area the year previous (this was South Oregon ’round ’99 or so). But work had to be done, otherwise nothing happened. I’d heard him say it before and he repeated it, “you have to try something, even if turns out to be wrong, you have to try.” And we did, and it worked out, fortunately.

I’m looking at this new release being pushed back new (street date is May 15th)and the struggles our industry is facing right now and I’m kind of approaching it the same way. There are groups that have sprung up to push a lot of indie comic books, some of the effort is fairly back slapping in nature but I’m seeing people getting deliveries and co-operating on getting new content out there outside of normal distribution channels. And damned good on them for making it happen. Some of the schemes out there have put the horse ahead of the cart and have already folded, but if they get their ducks in a row they might be on to something, I’m looking at you ComicsHub.

I’m seeing WotC pushing really hard on their online platforms, which previous to this natural disaster, their push for it always kind of rang with a bit of a back handed slap on our industry considering all the things that happened in conjunction with its rapid deployment. I can see that they are making an effort, not just in kind word but with actual monetary effort to use THAT platform to pay forward the years of work shops put in helping them push the paper form of the game… and it kind of softens my jade heart a little bit. They still have some proving to me before I’m fully behind their Premium Store format stuff. But the current effort is a very big step.

Now that you’ve read ALL of that. Here is some of the things that they are doing.

A reprint at their entire expense of Mystery Boosters which will give full profits to the stores they are delivered too.

A new tournament software (still in early stages) for running online tournaments that will include some prize support and incentives for stores to help run them, including monetary support for shops (optional entry fees) and online prizes for customers who participate.

All that being said they are offering to give us additional support with Mystery Boosters if we do the very simple task of helping to promote a paper product we were going to advertise for anyway and report back that we did so. I think its overly generous on their part but I won’t look a gift horse in the mouth. So take a look below and please contact me with your orders if you have them. I’d be happy to fill them as best we can come the 15th (hopefully). Your preorder and prepayment now, does help us down the road.

Thanks for checking in with us. Cheers!